There are many terms that we come across every day in the power industry. Some are acronyms and others are industry terms. For the obvious to the ambiguous here are our thoughts.

This will be a post that we’ll update every time we think of any others. And if there is anything you’d like us to add just get in touch…

3 phase power. The electricity from all 3 electrical windings.

AC. Alternating Current. Electricity that alternates polarity at a given frequency, The normal electrical supply from the National Grid and at 50Hz.

ACBs. Air Circuit breakers. Typically large protective devices that use air as the isolating medium that stops electricity travelling through a circuit. 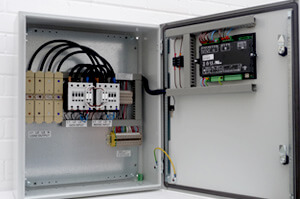 AMF Panel. Automatic mains failure panel that starts the generator on the event of a power cut and safely transfers the load between, mains power and generator power.

AVRs. Automatic voltage regulators. The electronic device which controls the output voltage of an alternator.

Base load rating. The rating given to a generator when it is used for continuous supply of electricity at a given load 24/7.

Battery Cell. An electrochemical device for the provision of Direct Current (DC).

Battery banks. Lots of batteries connected together to produce the required voltage and autonomy for the application.

Brown out. A drop in the mains voltage (not a total failure) that can cause degradation of lighting and electronic equipment. 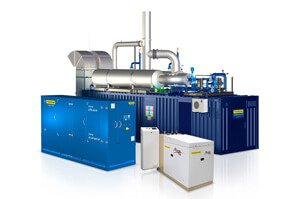 CHP. Combined Heat and Power. The simultaneous production of heat and electrical power from a single machine to deliver operational efficiency.

DC. Direct Current. Electricity with fixed polarity travailing in one direction; The characteristic of electricity from battery supply.

Demand. The total amount of energy required from the DNO.

Diesel bug. The build-up of algae and other bio organisms in diesel fuel.

DNO’s. (sometimes referred to as power distribution networks) District Network Operator, the organisations that have responsibility for the delivery of electricity at a regional level.

Fuel polishing. The cleaning of diesel fuel to prevent a build-up of algae and other organisms commonly known as Diesel bug.

Flue dilution. Introduction of fresh air into a flue system to dilute heat or particulates. 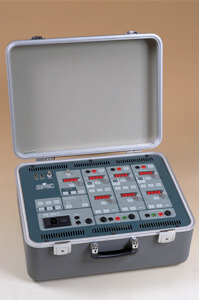 G59. G59 is the regulation surrounding the connection of any form of generator device to run ‘in parallel’ or ‘synchronised’ with the mains electrical utility grid ‘What is G59?’

G59 commission testing. The commissioning process to connect any form of generator device to run ‘in parallel’ or ‘synchronised’ with the mains electrical utility grid.

Genset. Slang for a generating set.

Glitch. A very short power cut, maybe as short as a second or 2. Not particularly disruptive to the business but damaging to electric and electronic equipment.

HV. High Voltage. Any electricity supply in excess of 650volts. Primarily used for the transmission of electricity over long distances.

Impact load. Also known as Step load. It is the amount of load put onto a generator in a single ‘step’ so 100kw might be allowed up to 50kw in a single step. This prevents the generator stalling. It’s what hits the power source in a single step/impact.

kVA. Kilo volt amps. A measurement of the electrical ‘pressure’ and ‘quantity’ to a building.

Loads. The equipment that is using the electricity supplied to a building.

Load bank testing. The use of a portable or mobile resistive or reactive load to test generators ancillary equipment.

Long power cut. Failure of the mains power external to your building, in excess of 30 minutes to 24 hours.

Mva. Mega volt amps. A measurement of the electrical ‘pressure’ and ‘quantity’ to a building.

N+1. Nominal plus one. You have one, such as a generator and the plus one is the spare to provide extra resiliency. The standby to the standby.

Peak lopping. Arranging a generator system to supply power in parallel with the mains when the mains capacity is exceed.

Power cut. A failure of the mains electricity by factors outside of your premises.

Prime rating –the rating given to a generator when it is used in lieu of mains power at a varying load. There is normally an overload allowed at this rating of 10% above the prime rating for 1 hour in 12.

Short power cut. A power cut of a few seconds maybe up to 3 minutes. This is subjective but as OFGEM only count power cuts over 3 minutes this is helpful when drawing comparisons.

Single phase power. The electricity produced from one phase of a three phase winding or from a dedicated singles phase winding.

Standby power. Maximum power a generator will give normally restricted to 1 hour in 12 for standby purposes only.

STOR. Strategic operating Reserve. The system set up by the National grid to utilised standby generators to augment the mains power in times of need. Hence the reason for the G59 regulations.

Surge. Overvoltage supply of electricity causing damage in sensitive equipment (opposite of Brown out).

Switch gear. The electrical distribution panels that distribute and protect the power supply around a building.

Volts. Electrical ‘pressure’ in a circuit.

Winding. The copper wire that produces electricity when it passes through a magnetic field.

Watts. The total energy supplied by a circuit.