The Guardian joins an array of press and media reporting how offshore wind farms could provide cheaper power than Britain’s new wave of nuclear power stations. Hugh McNeal, a chief executive of the wind industry’s trade body, RenewableUK, stated that he expects offshore wind farms would secure a deal with the government lower than the £92.50 per megawatt hour agreed with EDF for the £18bn Hinkley Point C nuclear facility. 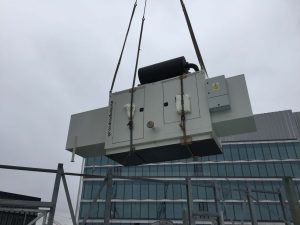 Unfortunately, the UK is not making significant headway towards securing higher National Grid reserve power levels though. As much support as renewable energy may rouse, many argue that its intermittent nature and lack of storage capacity offers little guarantee to improving reserve power levels. Having abandoned its ‘Last Resort’ scheme last year, due to lack of commercial participants willing to use less power at certain times of the day, National Grid comes under the spotlight once more. With scores of sources confirming that replacements to the ageing coal power station portfolio are not being commissioned fast enough, reserve power levels are likely to suffer for many years. Therefore, organisations with power-critical services need to act now on securing their continuous power supplies.

shentongroup will be occupying stand A45 at this year’s Data Centre World. If you’d like to learn more about securing your organisation’s power supplies, speak to the UK’s Leading Technical Experts in Standby Power, Uninterruptible Power Supplies and Combined Heat & Power Systems now! Click here to get in touch.