The Telegraph reports this week on how it says the National Grid has resorted to ‘last resort’ measures to keep the UK’s lights on, something that will not serve as reassurance to the many, many UK organisations that rely on continuous power for business continuity, data integrity, security and even the health of patients.

The so called ‘last resort’ measures were introduced for the first time on Wednesday 4th November, after coal power stations broke down and wind farms produced less than one per cent of required electricity. The new emergency scheme sees the National Grid pay large businesses to cut their electricity usage. So large buildings powered down their air conditioning and ventilation systems between 5pm and 6pm. Blaming the problem on multiple plant break downs as the UK sees even more older coal power stations decommissioned, it seems clear to most that this scenario is set to repeat as we approach the winter months.

So how can organisations protect themselves from power outages? The solution lies in the assertion of as much independence from the National Grid as possible and for smaller organisations, this would be the installation of backup, emergency generators. Generator purchase and rental, however, might not be to every organisation’s requirements and a service like shentongroup’s Power Call emergency generator service sees an emergency, mobile generator making its way to clients, often within the hour (guaranteed in three). 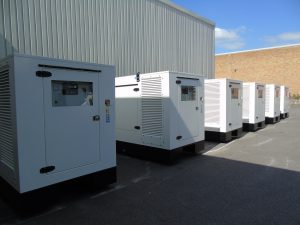 Larger organisations, especially those with requirements for large volumes of hot water will benefit from a combined heat and power system (or CHP unit). Sourcing the main power from a range of fuels including natural gas, as well as generating greener and cheaper electricity, CHP systems convert the heat generated in this process into heating and hot water supplies.

Being the UK’s leading experts in standby power, uninterruptible power supplies and combined heat and power systems, shentongroup provides a solution for organisations of all sizes throughout all industry sectors. Don’t let the increasingly precarious National Grid compromise your organisation. Get in touch with a member of the shentongroup team now to discuss the options available.